Your browser Internet Explorer is no longer supported, please use on another browser (Firefox, Chrome, Edge, ...) 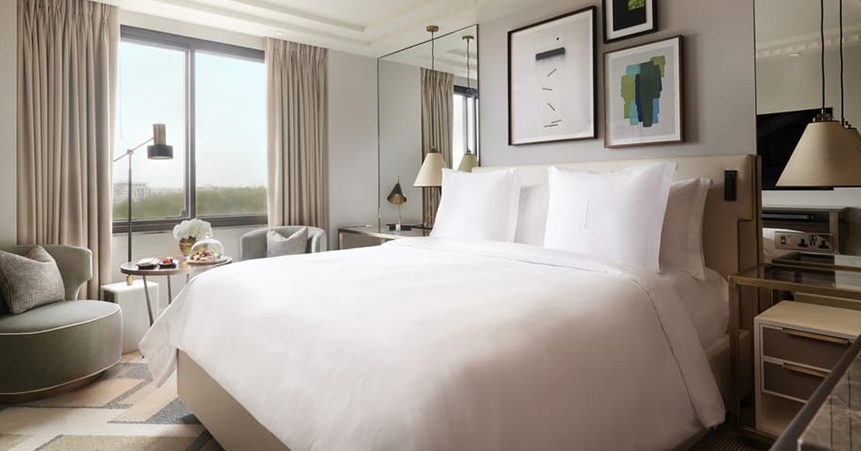 It may seem as though the city of London, its property market, its historical architecture, and its storied buildings date back to antiquity, while contemporary real estate projects appear as relatively new concepts. But renting an apartment at the exceptional Residences at the Four Seasons Hotel at Ten Trinity Square blurs the line between the past and the present.

The Building: Home of History

A place of historical grandiosity, Ten Trinity Square is a magnificent Neoclassical structure initially built in the 1920s as the headquarters of the Port of London Authority, an emblem of prosperity. Designed by the renowned architect Sir Edwin Cooper, it dazzled at Tower Hill on the shores of the River Thames with the grandeur of its limestone colonnade, monumental central staircase, stately statues, and sparkling marble lobby; not to mention The Rotunda and its stunning Art-Deco ceiling, embodying the glamour of the Roaring Twenties and earning the status of a Grade II-listed heritage building. Unfortunately, Ten Trinity Square was not protected from the dangers of the times and suffered devastating blows during the Second World War.

In a more recent turn of events, the Four Seasons hotel group decided to completely restore this classic building. While maintaining its period atmosphere, the re-work revealed even more interesting details, such as Roman ruins from over 2,000 years ago. In 2017, the Four Seasons Hotel at Ten Trinity Square, the group’s second property in London (the other located at Park Lane in Mayfair), opened to the public. The following year, its new development of rental residences was put on the market.

The Residences: Lavish and Limited

It’s rare to be able to indulge in an extended stay in a piece of historical heritage set in the heart of the city of London. It’s even rarer to stay in an iconic landmark transformed into an ultra high-end living environment of luxury hospitality. The Residences at the Four Seasons Hotel at Ten Trinity Square opens it decadent doors to long-term guests and part-time residents.

The quality of life in the Residences at the Four Seasons Hotel at Ten Trinity Square is as high as its top rental: the Tower Residence Penthouse, embellished with sublime interior design, collaborated upon by renowned firms, and private terraces overlooking the Tower Bridge and Tower of London. Situated between the third and seventh floors, the other units follow suit, varying from 1- to 4-bedroom apartments with open-plan living areas, bespoke kitchens with Gaggenau and Dualit appliances, ritzy dining rooms, exquisite bathrooms, and private access from a leather-clad elevator and The Rotunda, which has been converted into a chic dining space.

You are invited to short or long-term stays in the center of London, to choose the luxury apartment of your choice. The ultimate home away from home, there is no shortage of premium conveniences in each apartment: closets reserved for shoes and coats, spacious living rooms controlled by the latest technology (TV, music, and lighting can be changed by the touch of a fingertip on an iPad), an endless supply of Bottega Veneta beauty products, among others. The decor is held to the same standards, featuring a mix of tasteful textures: thick rugs, monotone artwork, bulbous table lamps, parquet timber floors, bulbous table lamps, black and gold granite, onyx lights, and metal sculptures among floor-to-ceiling drapes and perhaps even a sophisticated wrap-around library.

Renting an apartment at the Residences at the Four Seasons Hotel at Ten Trinity Square not only gives you access to a luxury home, but a luxury lifestyle.

Contact BARNES London to accommodate your 5-star stay in the heart of London.

An email has been sent with instructions to reset your password